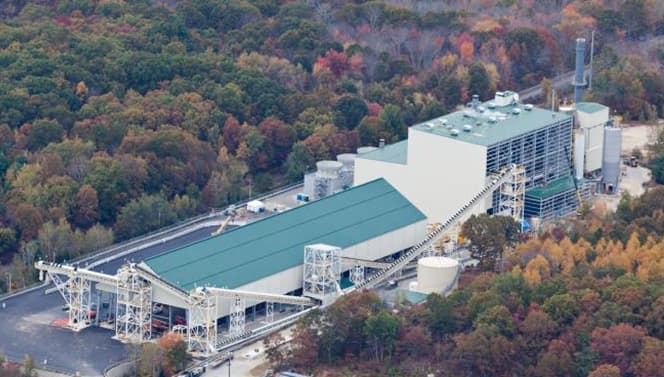 What is Plainfield Renewable Energy?

Plainfield Renewable Energy (PRE) is a woody biomass electrical generation facility located in Plainfield, Connecticut. The plant is a certified renewable energy source that has been operating since 2013 to supply energy and capacity to New England wholesale and capacity markets. Greenleaf Power acquired PRE in 2015 as its fourth facility and has invested heavily in environmental and operational improvements.

What does Plainfield Renewable Energy do?

PRE plant generates “green” power that does not contribute to a net increase in atmospheric CO2, and provides a market for waste biomass that would otherwise be landfilled or would be left to decay and produce methane, an extremely powerful greenhouse gas. In accordance with Greenleaf Power’s design, the plant delivers an array of economic and environmental benefits as it powers the Plainfield area, destroys methane, creates jobs both at the plant and in the surrounding region, and sets the pace for both emissions controls and up-time.

To do this, PRE utilizes a unique state-of-the-art staged gasification system, steam turbine and WEG generator to generate approximately 37.5 megawatts of power annually. The biomass facility creates this clean energy by burning approximately 350,000 tons of clean wood recovered from construction and demolition activities, including sustainable wood from forestry and land-clearing activities.

PRE facility is equipped with an advanced-design baghouse enclosure to capture particulates in emissions, as well as scrubbing systems for NOx and sulfur-dioxide control, and limestone and hydrated lime injection combined with a circulating dry scrubber for sulfur dioxide control. The facility uses this sophisticated staged-gasification system to convert woody biomass into a hydrogen-rich gas, and that gas is fed into a steam turbine which in turn drives an electrical generator. This produces the clean energy. In addition, PRE is well within local, state and federal emissions limits and operates under an EPA Title permit. Prior to Greenleaf’s investment, the plant experienced about a 20% forced outage rate. After Greenleaf’s acquisition and upgrades to the plant, it now experiences a 2-3% forced outage rate, compared to an industry standard of 8 to 10%.